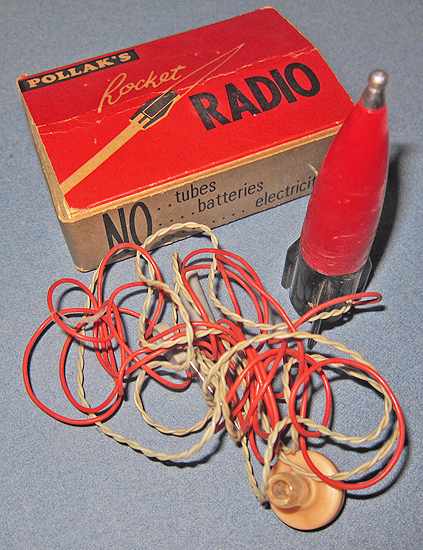 I suppose it all started the day I ordered a crystal radio from an advertisement on the back of a box of cereal. I was your typical 11-year old, plugging away through grade school, cruising my bike around the neighborhood, avoiding the bully Jim Adair, and playing spin-the-bottle with Lolita Hodges from across the street. Just generally being a kid. Little did I know my horizons were about to get broader – much broader.

So this tiny rocket-shaped plastic item arrived in the mail a week or so later, with instructions written for a kid just like me.

“Connect alligator clip to a water pipe. Attach one end of the ear plugs into your Rocket-X Crystal Radio and insert the other in your ear. Tune your radio by sliding the Rocket-X antenna in and out.”

Simple enough alright but I quickly realized I had no water pipe in my bedroom, and the alligator clip cord wouldn’t reach all the way to the bathroom. Not to be deterred, I connected the supplied alligator clip to my bedroom window screen, snuggled under the covers, and listened.

At first I heard only distant static, but then, growing ever stronger as if riding the crest of a wave, came music, both familiar and strange. I recognized Elvis, and then something from the Grand Ole Opry, and next a pitch for Brylcream and finally a man speaking Spanish … and just like that a young boy was hooked on the lure of the airwaves. I never knew what was coming next and that intrigue and uncertainty fueled my burgeoning youthful imagination.

My Rocket-X was soon replaced by a Goliath of a receiver, a National NC-183D, and I heard even more seductive and wonderful signals through my headphones each night.

Broadcasts in more languages than I knew existed came crackling in, along with curious beeps and tones that I later learned were Morse Code signals. I was determined to understand those as well, and thanks to my Dad’s intervention, was soon sitting in on a code class being given by the local radio club.

As is the fortuitous case with most youngsters, the code came to me effortlessly, and I had a solid grasp of the alphabet, numbers, and radio Q signals in short order. An Amateur Radio license exam was the next important order of business for this radio-obsessed pre-teen, and was administered by a family friend who was also our life insurance agent. Little did he known that he was insuring a lifetime of joy and wonder that far exceeded any standard policy he could ever have written.

So eager was I in anticipation of that coveted envelope and license from the FCC that I stood by the dining room window and peered anxiously with binoculars down toward our mailbox each afternoon. I placed a colored piece of paper half in and half out of the box, so that it would fall to the ground when the mailbox had been opened and I’d know the mail had arrived.

The first week’s wait didn’t go quite as expected though, as I would find mail in the box and the signaling paper still in place as well. Watching the mailman one day, I discovered he was carefully replacing my tell-tale colored strip of paper, assuming it had some higher calling. I rushed to explain my urgency and the signaling device I had employed, and once he was on to my scheme he allowed the paper strip to fall to the ground each day.

And my license finally arrived … and I was crushed by what I found inside. 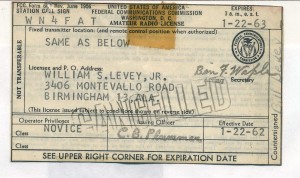 You see I was always particularly sensitive of my slender build, so much so in fact that I rarely wore shorts back then, fearful of exposing my often mocked legs. And what could be more humiliating than a mocking callsign? My Novice Class Amateur Radio callsign was WN4FAT! FAT? Not me. Not in a million years, I thought. But then I sounded out that new callsign in Morse, and it had quite the nice rhythm, I thought – di di dah dit di dah dah, and my initial embarrassment quickly faded to hopeful optimism.

And so started a lifelong love of Morse and Amateur Radio.

4 thoughts on “In the Beginning”