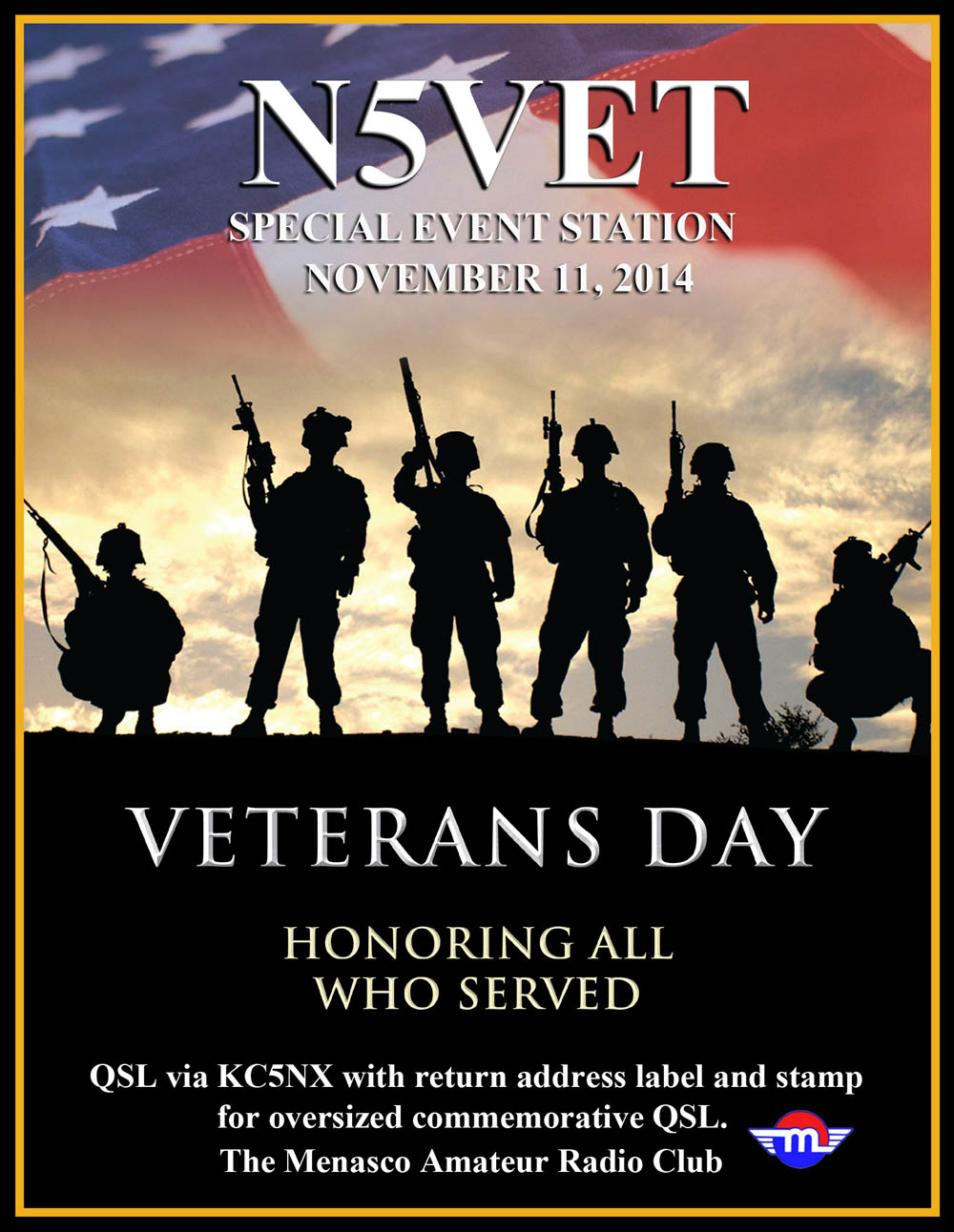 I had the pleasure of a QSO recently with KC5NX, and a perfunctory QRZ lookup during the contact revealed this to be the club callsign for the Menasco Amateur Radio Club in Cleburne Texas. As I visited with Jay, who was manning the station at the time, I read further that the club was sponsoring a special event operation for the upcoming Veterans Day celebration.

Seems as though they had made arrangements with Mike Cockrell, former 82nd Airborn veteran N5VET over in Oxford Mississippi, to use his callsign for the event. How cool is that, I thought, and what a terrific call to use for a Veterans Day special event station.

I remarked to Jay that I hoped to catch the N5VET operation on the air, that I was also a veteran, and that I had a tremendous appreciation and respect for all those who had served.

And when we wrapped things up and concluded our QSO, I made a mental note to search for the event station come Veterans Day. But as it turned out, I heard from Jay again far sooner than that.

Only a day or two later I received the following email from the Menasco Club:

I’m sure you have worked a lot of special event stations in your years on the air.. Have you ever operated as a special event station ? ?  We have permission from N5VET to use his call sign for the November 11th event… Would you be willing to be one of our operators ? You would operate from your location, when you wanted to during the 30 hour event and the mode and freq of your choice…. I am the only CW op so you and I would do all the CW QSOs..

The invitation came as a complete surprise, as we hadn’t discussed anything of the sort during our earlier contact, and it gave me pause. What an honor, I thought, to have a chance to represent those who had served, and to do so with a special event Amateur Radio operation too. But I wondered about the logistics of it all.  I informed Jay that while I appreciated the opportunity tremendously, he should know I had an effective antenna only for 40 meters. And realizing there could never be more than one operator per band and mode at any given time, I had some reservations about how this might be coordinated.

Several additional emails winged their way between Birmingham and Cleburne and the deal was struck. I would be the sole 40 meter CW operator with carte blanch to run wherever and whenever I wished during the 30 hours of the event, so no coordination needed.

What fun this would surely be, and I shared news of the upcoming operation with my friends in the Straight Key Century Club as well as fellow members of the Birmingham Amateur Radio Club.

The arrangement with Mr. Cockrell to use his callsign allowed operation to begin on Veterans Day eve in the US, at 0000Z, and to continue until midnight CST on Veterans Day itself – a full 30 hour window. Aware that propagation during the daylight hours was hit or miss on 40, I set my sights on the two evenings of the event.

And so it started as I called:

And at first, nothing.

The majority of recent US special event stations tend to use special-issue one by one prefix callsigns, something like W5A or K3Y, and so folks are accustomed to those calls representing some sort of event station. Perhaps listeners thought N5VET was just another station calling CQ. And calling CQ on CW didn’t offer quite the same ability to explain the nature of the event as would be available to those running voice, either.

But then I called again.

And this time, not unlike soldiers marching in steadfast single file, they came. One after another reached out to N5VET. Some perhaps sought only another commemorative QSL card to add to their collection, but far more wished to offer thanks to those who served in the defense of our great country. “God Bless America” was an expression I heard often, and stations shared their own military service as well.

“Former USN Radioman”, sent one, and “USMC Fighter Pilot” telegraphed another. I learned that a ‘pooch pusher’ was a member of the Canine Corps, and that a “ditty bopper’ was a High Speed Morse Code Interceptor in the Army. One submariner boastfully remarked that there were only two kinds of ships; Submarines and targets. And another aviator proudly shared that he was 90 years old and had been a CW operator aboard a B29 during World War II.

Nearly every contact brought a growing warmth of gratitude for those Veterans we honored that day, and I felt blessed to be in he thick of it with N5VET.

And so it was a particularly poignant Veterans Day for me this year, one that I shared with a hundred or so fellow Radio Amateurs through the magic of the world’s greatest hobby. Thanks to the Mensaco Amateur Radio Club for the opportunity, and heartfelt appreciation to the men and women who so selflessly served. God Bless you one and all.