Throughout my entire ham career I’ve been blessed with wonderful friendships. It’s the nature of our hobby, I think. We hams are nothing if not passionate about Amateur Radio, and who doesn’t enjoy the company of someone who shares your zeal and enthusiasm?

One such longtime friend is Tom Desaulniers, K4VIZ.

Tom lived for many years just outside my home town of Birmingham, in the cozy community of Leeds. At first, Tom lived down in the valley, but later built his dream home up on the highest hilltop around, most assuredly to help radiate his RF farther and wider than before, although I expect he gave his wife Patsy differing reasons for the move.

Tom is one of those exquisite engineers who does everything to the most exacting standards, and the construction of his new home was no exception. And his door was always open, and I visited whenever I could. And I expected Tom would live the rest of his days there.

But now Tom has relocated to Conway, Arkansas, smack dab in the middle of the state.

Some of you may recognize Tom as the master craftsman of the VIZKEY series of Morse sending devices. Tom took his extreme attention to detail and perfection and focused it on one of the great joys in his life – CW.

I had the pleasure of maintaining Tom’s VIZKEY web presence, and was always in awe at the lives he touched through his keys. Comments and testimonials flooded in from all over the world and it became commonplace to regularly hear others using his keys on the air.

And now that business has passed into Amateur lore as Tom and Patsy enjoy their new community of Conway and the freedom that retirement brings. Patsy is ever busy with her volunteer work, and Tom is helping his neighbors and friends, just like always. And Tom continues to touch lives, and mine is one.

And so it was with little surprise that I received an unanticipated package from Tom a few weeks ago. Tom was always generous like that. And inside I found a 40 Meter RockMite, one of those legendary miniature CW transceivers popularized by Small Wonder Labs and developed by Dave Benson, K1SWL. Tom knew of my interest in QRP (low-power Amateur Radio operations) and, in his typical fashion, wanted to share the joy of his tiny titan.

And just like everything Tom laid hand to, his craftsmanship with the RockMite was superb. Tom had cleverly built the diminutive transceiver into a tiny metal box, complete with a small amplified speaker and a tiny VIZKEY paddle. 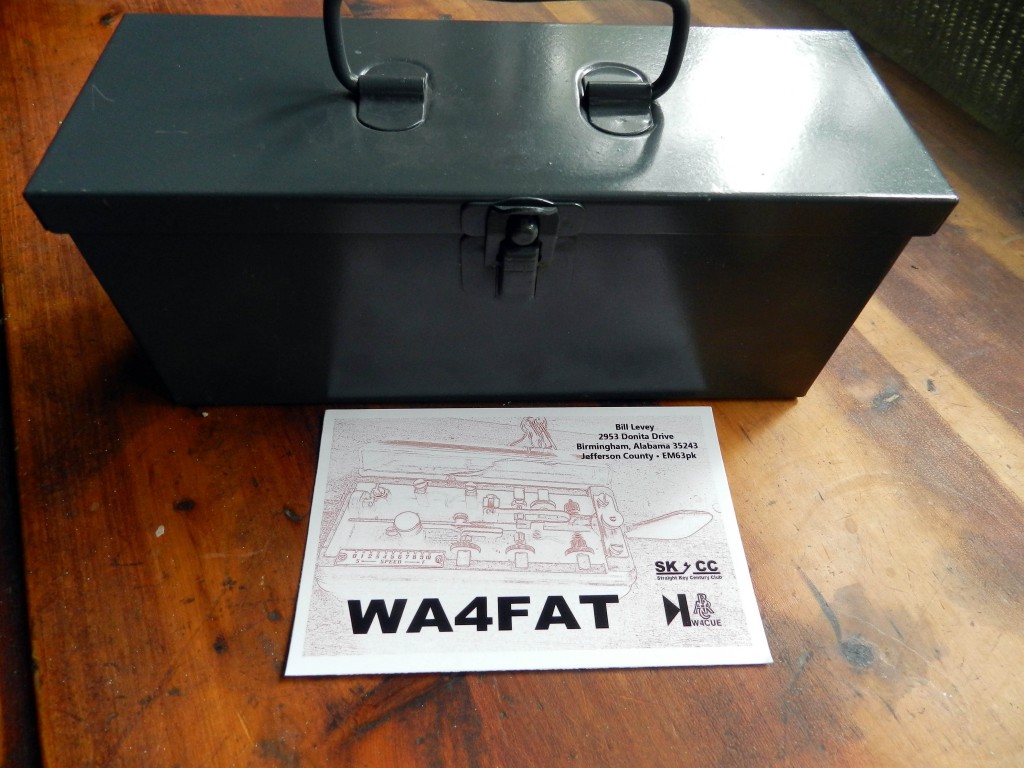 I couldn’t wait to baptize this beauty!

But conditions on 40 had been underwhelming of late, and summertime in Alabama is ripe with those pesky ubiquitous afternoon thunderstorms, so the timing just wasn’t right … until last night.

I was delighted to find 40 meters curiously quiet and invitingly open as I scanned the band for potential contacts yesterday evening and it occurred to me that this might finally be the opportunity I’d been so eagerly awaiting – a chance to take the RockMite for a spin around the block.

I connected my simple dipole antenna to the Small Wonder wonder, plugged in my Koss Sportapro headphones, flipped the power switch to the ON mode, and wondered what I might hear. But I didn’t wonder for long. Immediately signals began to spring from the Rockmite, loud and clear. This just might work, I thought.

Still incredulous at the prospect of anyone else actually hearing the 400 mW signal from this impossibly small radio, I arranged a schedule with a friend not far away in Tennessee.  He was a QRP expert, had a wonderful radio location, a good antenna and the sensitive Elecraft KX3 at his disposal. If anyone can hear me, I figured, he could.

And so I called CQ, and waited anxiously for a reply.

And there it was! WA4FAT de KC9W. My friend Randy had heard me and we proceeded to have a brief but solid conversation. He gave the Rockmite a 579, too, an exceptional signal report for an HF radio using AA batteries as its power source. I couldn’t help but shake my head in disbelief as the conversation continued, and I experienced emotions I hadn’t felt since those Novice days of so long ago.

I had worked QRP before, mind you, but never on 40, never with power levels so low, and always with the benefit of a high gain antenna. But this was 40 Meters, with a marginal dipole, and less than half a watt of power!

And when we finished our amazing QSO, I reached for the keyboard to log the details of our contact. And then I heard it.

Another station on frequency sent “QRPP ??” And I realized I was being called by someone else. And I quickly responded, “QRZ QRZ de WA4FAT/QRPP”.

And another unthinkable conversation ensued, this time with George in southern Illinois some 400 miles away. “Just wanted to let you know your RockMite is making it to Illinois”, he sent, “and that you’re almost solid copy too”, he continued.

Sleep was slow to come last night as I replayed the events of the evening. My mind raced with thoughts of QRP adventures to come, but mostly I was thankful.

Thankful for such wonderful friends as Tom.